After an entire year of negotiation, the two timeless groups “Bone Thugs-N-Harmony” and “Three 6 Mafia” will finally battle it off next month on Verzuztv. The news was like a bombshell to all fans when the official verzuz Instagram account announced the battle on November 12. The battle captioned “IT’S THAT TIME” will be LIVE in Los Angeles on Thursday, 2nd of December, by 4:30 PM. 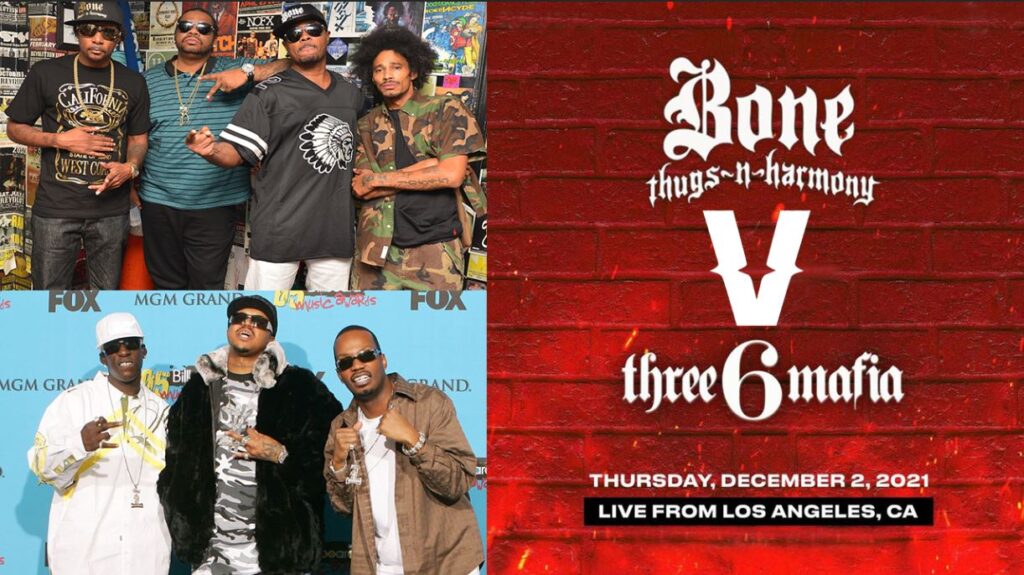 Three 6 Mafia and Bone Thugs-N-Harmony groups are both all-time groups that started in the 90s. Similarly, the two groups both came from the underground world. This upcoming battle took a year to negotiate. The face-off between these two groups has many hip-hop fans on the edge for what the outcome of the battle will be.

Ruthless Records signed the group in late 1993 when they debuted with their EP Creepin on ah come up. The EP included their breakout hit single “Thuggish Ruggish Bone”. Their hit song “Tha Crossroads”, a tribute to the deceased Eazy-E, won a Grammy Award in 1997. Bone Thugs-N-Harmony is the only group to work with 2Pac, the Notorious B.I.G, Eazy-E when they were still alive.

In 1997, “Tha Crossroads” won the Best Video of the Year Soul Train Music Awards. They also nominated the song for many MTV awards. They were “the most melodic hip-hop group of all time” by MTV.

About.com ranked them No. 12 on its list of the 25 Best Rap Groups of All Time. In 1998 and 2007, the group won the Favorite Rap/Hip-Hop Artist for American Music Award. Bone Thugs-N-Harmony is one of the most successful 90s rap groups to break into the mainstream. The group combines extremely fast rap flow with flawless vocal harmonies.

Recently, Thugs-N-Harmony released their latest album on the 11th of June, 2021. After more than two decades, the group still continues to be one of the most lasting franchises in hip-hop.

They formed Three 6 Mafia in 1991, although they did not release their debut album the same year. In 1995, the group released their debut album “Mystic Stylez” which later became an influential classic. We know this Memphis rap group for their grimy, bulldozing beats and brawling hooks. “Star Fly” the first major hit for the group, opened many doors for the group.

This hip hop group was the first hip hop group to perform live at the Academy Awards “It’s Hard Out There for a Pimp” won the best original song Oscar Awards in 2006. In 2008, the group won American Music Awards for the most favorite hip hop band. The group is majorly known for genres like gangsta rap, dirty rap, horror cores, underground hip hop, crunk, and trap.

This all-time group faced many challenges and in 2019, Juicy J and DJ Paul announced they will revive the group. The group performed their biggest hits live in Memphis from October 12, 2019, into 2020. Subsequent reunion performances and tour has made the group more solidified since their long time break. Three 6 Mafia’s worldwide album sales were at 5.5 million as of 2016. The group later grew to become one of hip hop’s most significant groups.

You can watch Bone Thugs-N-Harmony and Three 6 Mafia online in many ways. Here we try to cover the best two facilities to watch the upcoming verzuz battle live stream.

Although Verzuztv is suitable, it may not be the best for all fans because they can watch Verzuz’s show on TV.

You can stream live on Instagram! If you want to watch Verzuz battle Live stream free, the place to do so is on Verzuztv Instagram.

The battle between Bone Thugs-N-Harmony and Three 6 Mafia has been a long time coming. In the past, there was a short-lived beef between the 2 that inspired a one-off EP, “Live by Yo Rep”. These two groups initially wanted to do an event independently from Verzuz in April 2020. They had to cancel the battle at the eleventh hour. Swizz Beats contacted Krazie and convinced him to push the event forward. A year later, there were hints of negotiation. After that, the long-awaited battle will finally come up on December 2 in Los Angeles. In conclusion, the battle will be one of the biggest faceoffs of all time.